In June of 2013, I received a Yahoo Society of Ethnomusicology groups e-mail regarding a call for papers and presenter for RPPW 14, Rhythm Production and Perception Workshop, hosted this year by the University of Birmingham, in Birmingham, England. I had never heard of the workshop but was immediately excited at learning of their existence.

One of my long-term goals is to share my books, The Elements of Rhythm Volumes I & II, with the academic community. The comprehensive list of fundamental building block rhythm patterns and the indexing system used to number and identify them could be applied in many areas of study and research, so, I submitted an abstract of my books and theory to see if there might be an interest. 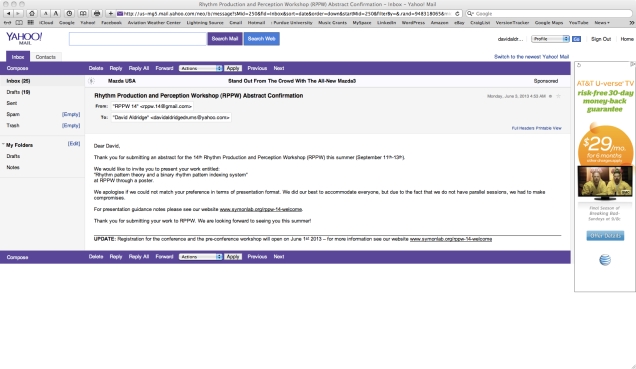 I was invited to be a poster presenter at the conference, which meant I needed to create a 4’ x 3’ poster to be displayed on a board in a room filled with other presenters. The poster had to convey what my books contained, so I condensed the two volumes into two sections on this:

The left side shows the logical progression of a beat divided into parts, and then the parts being assigned 0’s for silence and 1’s for sound to. This illustrated that rhythm patterns could be created and roughly depicted at any beat division level.

Next, rest and note shapes replaced the 0’s and 1’s to create the notation version of the Absolute Sound Shapes. This is the approach to rhythm pattern theory introduced and explored in-depth in The Elements of Rhythm Volume I.

The second portion of the poster presented the Binary Rhythm Pattern Indexing System.  I developed this simple system to number and identify the Absolute Sound Shapes within each of the combination tables. In this example, a measure of 4/4 is divided into four parts (quarter notes) and assigned four different rhythm patterns. Below each pattern is its Binary Indexing Number (BIN). Those BIN’s are highlighted in each of the four combination tables found at the bottom of the poster, showing how the patterns evolves sequentially in each table.

On of the greatest honors for me was inclusion in the official RPPW 14 programme, which got used quite a bit during my three-day visit!

After a 10-hour flight and gracious re-cooperative hosting by my friends, Bob Gentry and Tilly Casson, I left London by train and headed to Birmingham, two hours north. I hadn’t been back to Europe since I was in high school, and this was a lifelong dream to both return and to present my books and theory to the academic world. From September 11-13, I was completely immersed in the environment of some of the top rhythm perception researchers in the world. Surreal hardly even begins to describe the level of intelligence I was surrounded by.

Poster presenters were each given one minute to introduce themselves before the group each morning, and I was fortunate enough to be chosen for the first day. After listening to several Ph.D’s and Ph.D candidates give their 60-second summaries, I offered my books and theory as something that came from the layman’s world but could be applied to many levels of academic research. As far as I know, I was the only non-academic presenter at the conference.

After the morning lecture sessions, we broke for lunch in the poster presenting room. Mine was at the very furthest end, but quite a few curious and interested individuals found their way by to check it out and ask me questions. For the next two hours, I lived a dream I’ve had for thirty years: being able to show a unique and finished product and entertain questions and discussion about it.

Some of the people who came by included Dr. Andreas Daffertshofer, a researcher from the University of Amsterdam who specializes in human movement. Dr. Guy Madison is a research professor at Sweden’s Umeå University and is also a drummer, as was Dr. Carl Haakon Waadeland, from the Norwegian University of Science and Technology. Daniel Cameron is a neuroscience researcher and Ph.D candidate from the University of Western Ontario and drummer/percussionist who even joined me a few days later in a drum set/hand drumming event I presented for local group of kids and parents through Tourettes-Action UK, a support group.

But I’d say the highlight honor was meeting and speaking with the host of RPPW 14, Prof. Alan Wing. In the world of rhythm and timing research, he is the big dog rock star. He co-wrote a paper forty years ago that has remained the standard by which timing and rhythm perception questions are largely measured. I thanked him for the invitation to present and gave him a copy of my books, something I’d wanted to do for years.

My plan is to keep attending such conferences, make contact with the academic world, and work to bridge the gap between science and the arts. Our world as drummers is fascinating and relatively unexplored by science. I want to encourage this and hopefully offer my books and theory as source material to enhance that exploration.

To this end, I’m going to be collaborating with Dr. Gareth Dylan Smith, a drummer and head of the Percussion Studies division at  London’s Institute of Contemporary Music Performance. We are going to specifically work to promote the drum set as an instrument of academic study across many platforms. Gareth is also the author of I Drum, Therefore I am (Ashgate Press), and I wrote a short blog piece about him here two years ago.

I can’t really describe what it’s like to see a dream that took so long all the way through other than to say this: it’s worth every minute, every struggle, every sacrifice, and every step you take to finish what you start. When you do, you learn to live and keep living. It’s huge, and it’s fuel for much more to come…

The Elements of Rhythm, Vol. I

The Elements of Rhythm, Vol. II